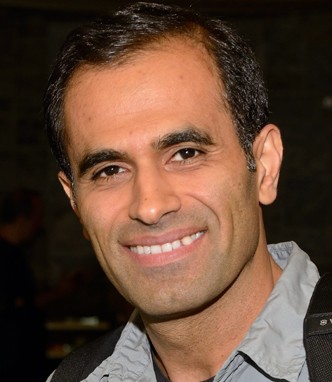 Saeed Tavazoie, Professor of Biological Sciences and of Systems Biology; in Biochemistry and Molecular Biophysics in the Dept of Biological Sciences, did his graduate work with George Church at Harvard Medical School, receiving his Ph.D. in Biophysics in 2000. He was professor in the Department of Molecular Biology and the Institute for Integrative Genomics at Princeton (2000-2011) before joining the faculty at Columbia. His research is focused on understanding the principles that govern the organization and behavior of biological networks. His laboratory has developed conceptual frameworks, computational approaches and technologies to make large-scale observations of gene expression, molecular interactions, and phenotype and to use these datasets to build predictive models of gene regulation and cellular behavior. His group has shown that minimally constrained statistical learning methods enable prediction of gene expression patterns directly from DNA sequence, revealing the vocabulary and grammar of the non-codding genome.

A major focus of his lab is to apply these approaches to systematically reveal gene regulatory perturbations that accompany cancer initiation and progression. For example, in collaborative work, his lab has found an important role for RNA binding proteins and their interactions with structural RNA elements in metastatic progression. Recently, his lab has discovered a new phenomenon by which cells adapt to extreme environments through a trial and error process that optimizes gene expression. This mechanism, called stochastic tuning, may be a widespread eukaryotic phenomenon that enables adaptation to extreme/unfamiliar challenges that are beyond the capacity of conventional hard-wired regulatory mechanisms. His laboratory uses diverse experimental systems from bacteria to mammalian cell-lines in order to study general principles that operate across organismal taxa and complexity.